This is the ultimate Greek snack, which packs SO much flavour! The perfect light lunch on a hot summer's day...or to accompany some delicious retsina! 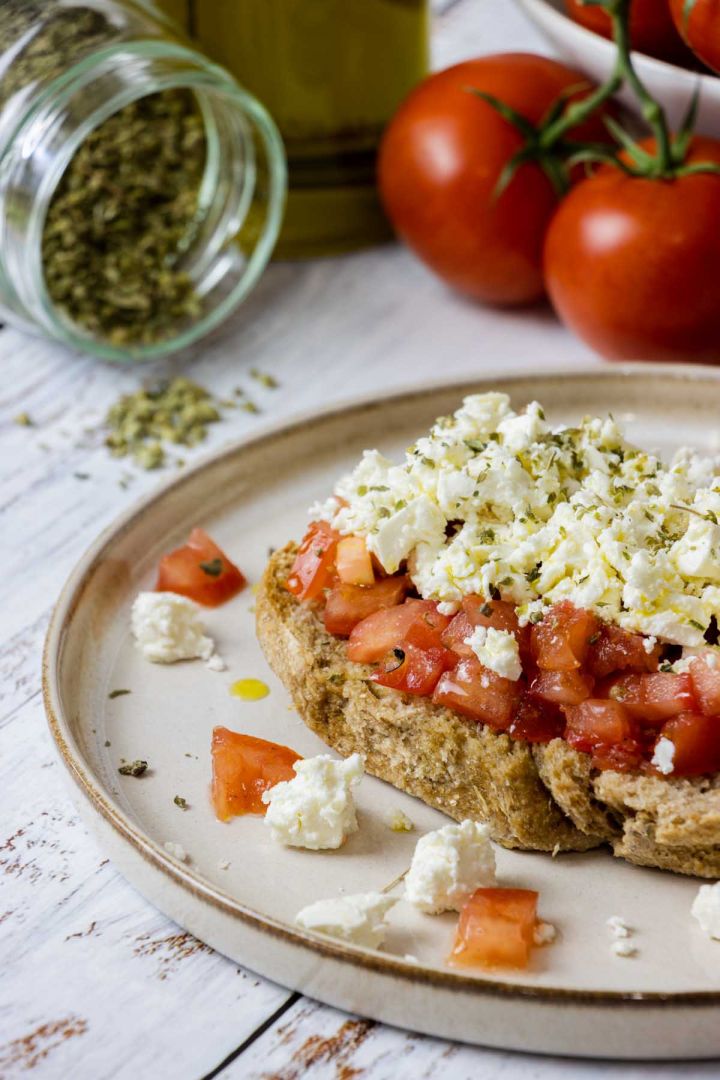 This recipe for Cretan Dakos, or ‘krhtikos ntakos’, is ideal for those summer days where you just want something light and vegetable based. A little reminiscent of an Italian bruschetta, it is basically a crisp bread or rusk topped with veg - most traditionally, tomato - and feta, alongside something zingy and savoury, like red onion, capers or olives. It’s a perfect ‘store cupboard’ recipe, too, because you can keep the Dakos rusks in the cupboard for whenever you use them!

Dakos is a traditional Greek meze, or appetiser, made with kritharokoula, or barley rusks. Rusks are a type of hard, twice-baked bread that originated on the island of Crete. They are made with barley flour, or a combination of barley flour and whole wheat flour, and often contain sourdough. Rusks keep for a long time, which is why they were the preferred bread in times when people did not have the opportunity to bake often.

The key to making these rock-hard rusks into an enjoyable base for a gorgeous lunch is that you must soften them. DON’T skip that step, whatever you do! It’s a perfect lazy Summertime lunch.

I refuse to accept that vacations are over and my social media feed still has photos of my friends having fun at various Greek beaches. So for today’s snack, I’ve prepared a good old Cretan Dakos, which packs SO much Greek flavour!

I’m wanting to try these when I go to Greece in a few days, but-where do you find the barley rusks here on the west coast of the USA? Thanks!

@Jan Nave I’m not sure where exactly you can find these rusks on west coast, but a quick search on Amazon revealed a familiar brand. I’d give them a try. 😊

Get our recipes delivered straight to your Inbox!